What would the place have looked like without those First People gathered on the shore?

If you had sailed up the Kunermulukerker, the Tamar, in the wake of the first British interlopers what would the landscape have looked like WITHOUT First People presence and occupancy?

The riverine margins of vegetation would have been impenetrable rainforest backed by low rainfall eucalypt forest the land cover would have been a dominant. Launceston receives about 700mm/pa – rainforest receives >1000mm/pa and is vulnerable to fire.

The dry area around the Tamar is dominated by dry sclerophyll and sheoaks but it would have been thicker and more heavily wooded.
Narrow corridors of rainforest communities would have existed in gullies and in very protected polar-facing aspects, largely dominated by Atherosperma (sassafras) although areas of Nothofagus (myrtle) dominance would have occurred.

Extensive gully communities of Olearia (musk) and Bedfordia (blanketleaf)
would have extended to the coastal fringe.

With very low fire-frequencies, none of the present patchwork of open or semi-open communities, such as heath, sedgeland and grassland savannah, would have existed.

It is probable that, in the virtual absence of fire, in some regions
Allocasuarina (sheoak) forests would dominate.

That is a shock to our expectation because what was seen on the shore was a landscape substantially modified by First People activity.
Instead of rainforest we find an open grassland with dominant fire tolerant species like eucalyptus and casuarinas (sheoak) and only rainforest in wet margins.

Peppermint gums dominated the area outside Launceston and into the Midlands. Aboriginal firing turned the area into a huge marsupial lawn with trees so widely spaced that the early settlers often described it as a “gentleman’s park”.

As Aboriginal firing ceased as the Aboriginal population was decimated the trees died back naturally, from age, possum damage or fungus ‘die back’, regrowth was encouraged by ‘settlers’ pollarding the limbs of the Peppermints which do not split easily. By splitting and stacking the short ‘billets’ limbs about the base of the trees winter wood was collected and tree growth renewed well into the late 20th century.

Here is evidence of where white practice has kept in our minds and in the landscape the legacy of an Aboriginal presence. 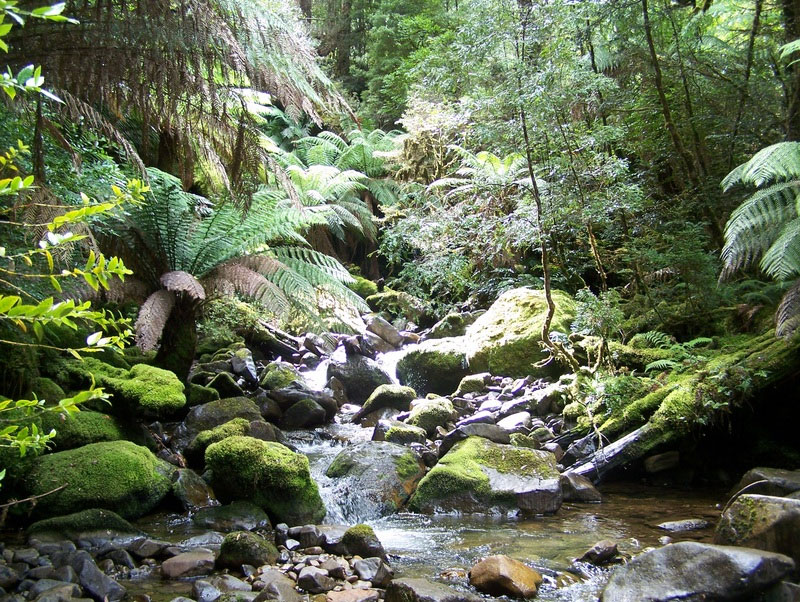 END_OF_DOCUMENT_TOKEN_TO_BE_REPLACED

A Vast Estate Managed with Purpose

END_OF_DOCUMENT_TOKEN_TO_BE_REPLACED

Is there evidence today of the landscape of the First People?

Actually, there is a lot of evidence if we know how to “read” landscape though intense modification of the Launceston basin makes that more difficult at that location.

This scene from the northeast seems simple enough but it tells a complex story.

END_OF_DOCUMENT_TOKEN_TO_BE_REPLACED

What does past practice mean in the present?

The substantial alteration to the landscape by First Peoples does not give permission for us to treat the present landscape as a blank slate to be scribbled on.

END_OF_DOCUMENT_TOKEN_TO_BE_REPLACED

Why multiple names for the river?

Many languages use generic names with adjectival qualifiers e.g “Grey Kangaroo” where “Kangaroo” is the basic word for the animal and “grey” is an adjectival qualifier that broadens our understanding of the basic generic word.
Aboriginal languages tend to use separate, multiple terms instead, so that “grey kangaroo” or “pregnant kangaroo” would be distinct words yet in the understanding of the First People it is assumed we are talking about the same creature with different aspects.