Ochre Exploitation Around the Tamar

Until very recently it was thought that Tulampanga, near Mole Creek, was the only source of high-grade ochre available to Indigenous peoples.

Europeans in the 1820s discovered some of the best-quality ochre in Australia, at Beaconsfield and Rocherlea, though they did not consciously connect it to the Aboriginal population. The quality of the Tamar material was such, however, that a paint industry was established in Launceston in the 1920s.

With indigenous settlement of the Tamar going back 40,000 years, however, it is simply not credible that they would not have already known of these resources. Apart from its use in their cultural practices, the ochre would have been a prized trading commodity, perhaps in exchange for access to other group’s country, for example.

The question is naturally asked – how were these deposits found so early by white settlers? 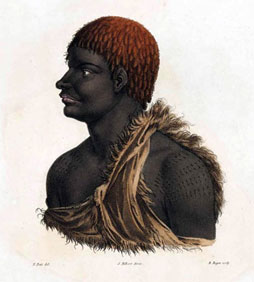 Ochre had significant cultural significance, as can be seen from this French painting of a Tasmanian Aboriginal man encountered by the Beaudin expedition of 1807. Image: SLNSW

The world-class gold deposit at Beaconsfield was found by luck, when a tree blew over and gold was seen in its roots. Mineral resources are usually covered by soil and vegetation. It is therefore a well-established practice in mining, of ‘discoveries’ actually taking advantage of earlier exploration which had exposed a resource.

The early discovery the ochre strongly suggests that it was found when European pioneers noticed, and followed up on, indigenous quarrying activity. The quality of the mineral around the Tamar strongly suggests it was a very important resource to the local indigenous people over millennia. 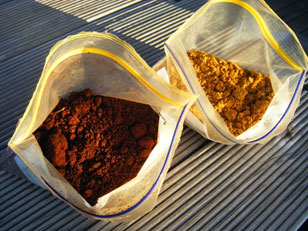 High quality ochre can be found on both sides of the Tamar. Image: Dr Paul Richards 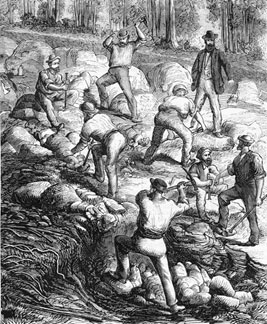 An 1873 sketch of miners only a few metres from the ochre deposit at Beaconsfield. Image: Illustrated Tasmanian News 1873. 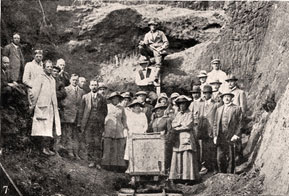 Four hundred metres long and a metre high: What were these middens?

The considerable size of some Aboriginal middens raises questions. These are constructed consciously and deliberately – they are not the result of people idly tossing discarded shells over their shoulder.

END_OF_DOCUMENT_TOKEN_TO_BE_REPLACED

PALAEO ARCHAEOLOGY OF THE TAMAR VALLEY

Human history in the Tamar Valley could extend back some 40,000 years considering that at least one site in the upper Forth River 200km west has such a basal date, but the Tamar lacks sites, caves, that could confirm this. The only site to yield a date is at Flowery Gully, near Beaconsfield, being calibrated to c.8,000 BP a bone deposit with a bone tool.

END_OF_DOCUMENT_TOKEN_TO_BE_REPLACED

Ochres are earthy, pulverulent (reduced or crumbled to powder or dust) forms of Haematite and Limonite or friable (easily crumbled), earthy iron ore.

It is widely distributed in Tasmania, both as small pellets in gravels (Tamar Valley) or in reefs (Alum Cliffs). It takes the form of a natural pigment, browns, reds and yellow. Red in its most vivid state is most prized, yellow it seems is rarer.

END_OF_DOCUMENT_TOKEN_TO_BE_REPLACED

In early 1801 Philip King, now Governor, decided to establish a government coal mining operation at Newcastle. Although the expedition was nominally under the command of another officer, it included William Paterson, newly appointed as Lt-Governor.

END_OF_DOCUMENT_TOKEN_TO_BE_REPLACED

This work, which comprises the three separate study papers, was put together being all connected to the Tamar Valley’s Palaeo-Aboriginal history.

END_OF_DOCUMENT_TOKEN_TO_BE_REPLACED

This work is a collection of papers each pertinent to the art produced over thousands of years by the Palaeo-Tasmanian Aboriginal people.

Their art had roots extending back to their original homeland “Africa”, to what extent can only be wondered, but with obvious relationships that all foraging people have in common.