The Origins of the Term “Stoney Creek Tribe”

While the term ‘tribe’ was used by Europeans to describe Aboriginal groups is misleading. Tasmanian Aboriginal groups were loose associations of family or hearth groups (up to about 30) that identified with particular country, but these are not the ‘tribes’ of North American experience, which influenced the language, with their large villages and strong hierarchical ‘chiefs’. “Clan” or “Band” are more accurate terms though the simple term “Mob” favoured by Aboriginal people today is probably just as appropriate.

The names of Aboriginal groups were bestowed by the British with fairly careless disregard for their own self reference, so some caution needs apply to these names.

“Stoney Creek Tribe” was a term used by George Augustus Robinson to include the Northern Midlands and Tamar Valley. Ling Roth however confines the reference to those around Campbell Town and Ross and suggests the name derived from a small tributary of the South Esk to the north of Campbell Town. Aboriginal Elder Aunty Patsy Cameron favours the term Stoney Creek and Professor Lyndall Ryan also used it however it is a fairly loose application with which other writers such as Barry Brimfield strongly disagree with its application.

The use of the term on this website defers to Aboriginal Elder Patsy Cameron but recognises the conjecture that arises in the use.

The Origins of the Term “Stoney Creek Tribe”

an edited form of the contribution by Barry Brimfield

As white pastoral intruders ventured inland, they applied names to the Indigenous population, not knowing nor caring how they referred to themselves and not knowing the boundaries of the country they occupied. That means we have to approach these terms and usages with caution.

The term ‘Stoney Creek Tribe’ occurs in the work of Ling Roth[1] who he describes as occupying the ‘centre of the island, roving about Campbell-town, Ross and Saltpan Plains.’ The boundaries of his nine “tribal” groups, however, does not suggest the Stoney Creek ‘tribe’ extended down the Tamar, which, on his map, is shown as part of territory of the North Eastern and Port Dalrymple people.

The name, Ling Roth suggests, derives from a ‘small tributary of the South Esk, near Llewellan to the north of Campbell-town’, so an entirely white construction and imposed name.[2]

In 1966 archaeologist Rhys Jones[3] did include the Tamar region in his ‘Northern Midland Tribe’, so merging the area of the Tamar people with Ling Roth’s area occupied by the ‘Stoney Creek Tribe’. 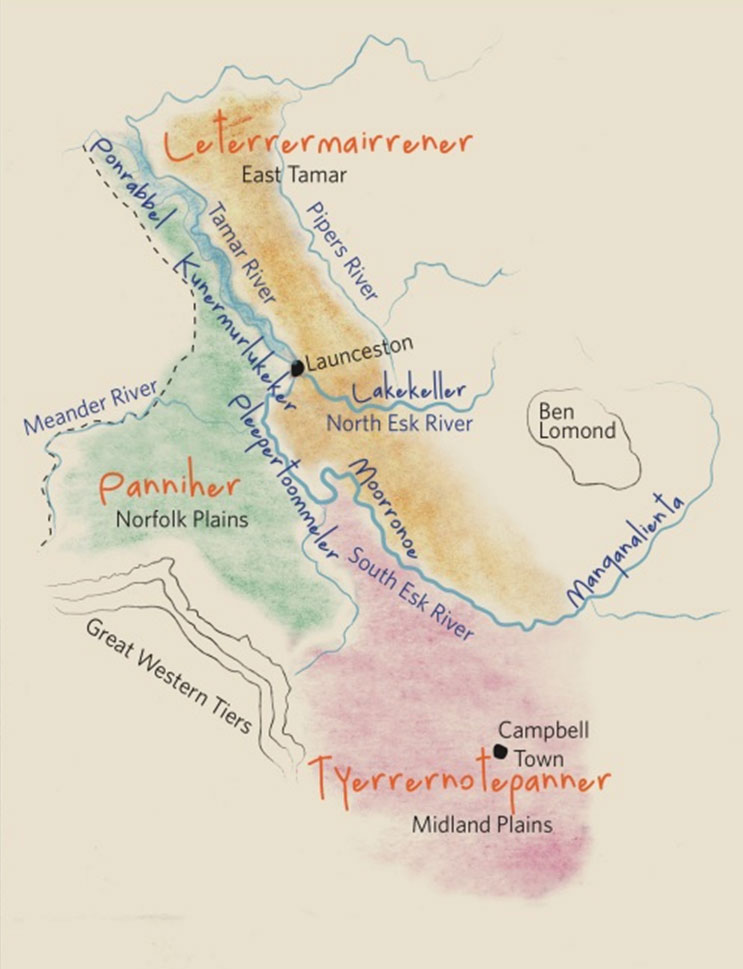 Aboriginal Elder Aunty Patsy Cameron in her Grease and Ochre[4] favours the term Stoney Creek Nation and in an accompanying map shows the Tamar and Northern Midlands area as the Stoney Creek Nation. In this she follows Lyndall Ryan[5] and there is a suggestion that George Augustus Robinson used the term. Robinson does mention the term in passing, in particular to Eumarrah who Plomley suggests was “chief of the Stoney Creek Tribe”.[6] But then there are other references to Eumarrah (and variations on the spelling of his name) being from Port Dalrymple[7] and also Oyster Bay.[8]

The problem, as is frequently the case, references are often loose, imprecise and based on European usage so to some degree a consensus often emerges to favour a description though that certainly does not mean vigorous disagreement is avoided.

[4] Patsy Cameron Grease and Ochre: the blending of two cultures at the colonial sea frontier (Hobart: 2011), 126.

Four hundred metres long and a metre high: What were these middens?

The considerable size of some Aboriginal middens raises questions. These are constructed consciously and deliberately – they are not the result of people idly tossing discarded shells over their shoulder.

END_OF_DOCUMENT_TOKEN_TO_BE_REPLACED

PALAEO ARCHAEOLOGY OF THE TAMAR VALLEY

Human history in the Tamar Valley could extend back some 40,000 years considering that at least one site in the upper Forth River 200km west has such a basal date, but the Tamar lacks sites, caves, that could confirm this. The only site to yield a date is at Flowery Gully, near Beaconsfield, being calibrated to c.8,000 BP a bone deposit with a bone tool.

END_OF_DOCUMENT_TOKEN_TO_BE_REPLACED

Ochres are earthy, pulverulent (reduced or crumbled to powder or dust) forms of Haematite and Limonite or friable (easily crumbled), earthy iron ore.

It is widely distributed in Tasmania, both as small pellets in gravels (Tamar Valley) or in reefs (Alum Cliffs). It takes the form of a natural pigment, browns, reds and yellow. Red in its most vivid state is most prized, yellow it seems is rarer.

END_OF_DOCUMENT_TOKEN_TO_BE_REPLACED

In early 1801 Philip King, now Governor, decided to establish a government coal mining operation at Newcastle. Although the expedition was nominally under the command of another officer, it included William Paterson, newly appointed as Lt-Governor.

END_OF_DOCUMENT_TOKEN_TO_BE_REPLACED

Ochre Exploitation Around the Tamar

Until very recently it was thought that Tulampanga, near Mole Creek, was the only source of high-grade ochre available to Indigenous peoples.

END_OF_DOCUMENT_TOKEN_TO_BE_REPLACED

This work, which comprises the three separate study papers, was put together being all connected to the Tamar Valley’s Palaeo-Aboriginal history.

END_OF_DOCUMENT_TOKEN_TO_BE_REPLACED

This work is a collection of papers each pertinent to the art produced over thousands of years by the Palaeo-Tasmanian Aboriginal people.

Their art had roots extending back to their original homeland “Africa”, to what extent can only be wondered, but with obvious relationships that all foraging people have in common.